Air Campaigns
Want to start or join a group build? This is where to start.
Hosted by Frederick Boucher, Michael Satin
OFFICIAL: Dive Bomber Campaign

REPLY & QUOTE
Emeritus (Eetu Tahvonen) said
Not having had time to do some modeling in a while, I've been thinking this campaign would be a great way to get some modeling done again.

As for my entry, I'm leaving towards Revell's 1:72 scale JU 88 A-4. Would it be OK to participate with this one despite a start a very minor start being made on it a while ago already? Nothing major, just a small bunch of parts removed from the sprue and a couple glued together. I've made a bit of start. Assembling wings, stabilizers, and cockpit components, filling ejector pin marks from areas where they might be visible in the finished model. Having Hasegawa's kit of the same subject in my stash, I've been comparing them side by side. Really peculiar how Hasegawa has finer and more subtle panel lines and surface details (not to that Revell's are bad no by any means), but has really clunky propellers and seats, as well as somewhat simplistic cockpit interior, whereas Revell really shines in those areas.

I've masked the painted yellow leading edge bands, and then painted the undersides with the same olive gray mix that I use for my Zeros. Afterwards I used some Silly Putty to mask where the wavy demarcation line would be.

And then I sprayed over with Tamiya XF-70 Dark Green 2, the same green I use for my Zeros too.

After the paint has cured, I removed to masks for the reveal. I'm really glad how this turned out!

I just found out that I still need to do a few more masking jobs for the red strips along the wing walk areas, so that will be my next agenda. I'm just hoping the weather would cooperate with me because rainy season has officially been declared by our local weather agency.

REPLY & QUOTE
BoiseBlade (Jeff-D) said
I am finally ready to put a coat of primer then pre-shade as well.

The scratch built bomb rack is completed as well.
This kit was the torpedo version. But they still supplied open or closed bomb bay.

REPLY & QUOTE
kamadoma (Vincent Alinan) said
For today, I decided to paint on some red strips for the wing walk area. I've also handpainted in some minor details like the exhausts and silver for the lights. After this, clear coat was added in preparation for decals.

And this is where a wrench got thrown into the works. As I tried to slide off the hinomaru decal on the bottom of the wing using a toothpick (which I always use for my past models), the decal crumbled. I consulted with other modelers and it turns out the decals on mine might have been old and dried. Nonetheless I still managed to apply the rest of the decals, this time using my thumb to slide them off. And they did require to be submerged in water for a long time before they slid off. As you can see in the photos, the portside hinomaru on the fuselage had some tiny cracks which I decided to leave as is.

So right now I'm almost done with the decals. I'll just have to check the local hobby shop if they have any hinomaru decal sheets, or I could try to find a stencil and paint in the hinomarus for the undersides of the wing. It's a stalemate as of now.

I think I will probably do the same thing. I was going to use paper but lifted on the edges...But not now

REPLY & QUOTE
Serlone (Remco Otten) said
I've been back to building airplanes for a short while after a long time of building tanks etc and thought it would be nice to join this campaign.
I'll be building the hasegawa 1/72 1940 Mitsubishi Ki-51 (Sonia)

it will be an out of the box build.
i'll post some starting pics tonight. 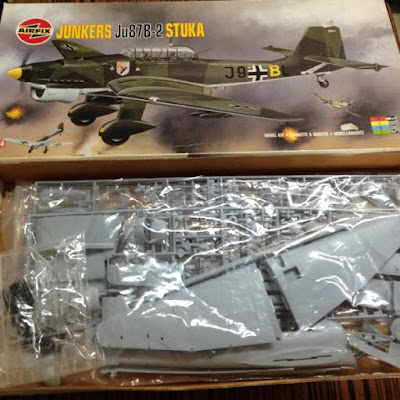 Eman: Hot damn buddy! I've got two in the stash, gonna be hanging on your every post!

Chris: been lucky to buy a pile of older hasegawa kits recently

REPLY & QUOTE
kamadoma (Vincent Alinan) said
I'm finally done with my Judy, feel free to check out the campaign gallery for my photos! I really enjoyed this group build and I look forward to joining a lot more.

REPLY & QUOTE
SGTJKJ (Jesper) said
I am going old school for this one with the old hell diver. The matchbox kit has a tea nice colorful scheme. I hope it will look good when finished

REPLY & QUOTE
SGTJKJ (Jesper) said
After closer inspection this is a trainer version of the hell diver and without any bomb release mechanism. I will go hunting in the stash for something else that fits.

REPLY & QUOTE
SGTJKJ (Jesper) said
I have now decided on the Skyraider. The last of the dedicated dive bombers. I do believe it was allowed by the campaign administrator earlier.

I will be building the Revell which is clearly a reboxing of some ancient kit. Bright white plastic that almost makes your eyes hurt and quite some flash and softish details. The decals look awesome though

REPLY & QUOTE
SGTJKJ (Jesper) said
A little progress on the Skyraider - the last of the line of dive bombers.

The plane can be made with folded wings. Not very often I get around kits with that feature - even if it requires the wings to be carved apart. So I decided to go for the feature.

REPLY & QUOTE
SGTJKJ (Jesper) said
A little more progress on the Spad. Basic assemblies are done. Next is to finish the cockpit painting and get the wings attached. Wings together. For some inexplicable reason the upper wing halves had some panel lines on the leading edge that weren't present on the lower halves, and vice versa. Not a big deal to scribe the missing lines, but still something I wish the designers had bothered checking before the molds were made. The outboard oil fill ports were missing, so I scribed those in (pointed by arrows in pic).
I'm thinking I probably want to add some rivet detail to the model, but I'm not 100% sure yet of what extent I want to go with. Engine nacelles assembled. Due to the nature of injection molding, the recessed detail on the sides near the edges of the nacelle halves had gotten shallow and indistinct, and needed rescribing to sharpen and deepen them. The circular detail (inspection hatch perhaps?) on top of the cowling behind the cowl flaps was represented as a raised circle, and suffered from being on the side of the molding, like the recessed details. Instead of trying to replicate the raised detailed, I followed the example of the Hasegawa kit I also have, and scribed them in instead using a circle template. The tail landing gear bays were devoid of detail, so I added some with stretched sprue and styrene strip. The kit's instructions want the rear landing gear to be attached at the same time the fuselage halves are joined, but being a little wary of adding such rather delicate parts at such an early stage, I glued pieces of L-profile styrene strip behind the rear support locator holes so I could get it glued in place easier with the fuselage already together.
Now I'm contemplating extending that detailing past the bulkhead and adding some detail to the bulkhead as well.

Next I think I should really focus on the cockpit and try to get this build going again.

REPLY & QUOTE
BoiseBlade (Jeff-D) said
Just a quick update to show I am still working on it.

Having just started my vacation, I hope to get back to my Skyraider soon.

I have been plugging along with my 1/72 Petlyakov Pe-2 from Airfix.

Construction is almost complete and I hope to post some photos soon (if I can figure out how).

REPLY & QUOTE
BoiseBlade (Jeff-D) said
Here is my completed project for this build.