If you have comments or questions please post them here.

I got this kit a couple of weeks ago but haven't started on it yet.. but it really is a nice kit.. and an encouraging sign of nice things to come.

Voyager just released a nice set for it that has the seat belts. and a lot of other things.

Karl did a very professional job on the review, and I'm glad to see more reviews about the Chinese. Their growing military might has made their AFVs more significant now that they're developing their own armaments industry.

Have any of their vehicles so far gone beyond copies of Western ones?

REPLY & QUOTE
russamotto (Russ Amott) said
This kit is on my "to get" list. I'd rather like one in 1/1 scale as well.

As far as Chinese vehicles being copies of western designs, some discussion on the Chinese military forums has dealt with this. Basically, it comes down to following success, with their own personal modifications. I'm watching Hobby Boss' releases in this area as they have a number of new subjects listed in two, three and four axle designs. Maybe the subject will become popular enough to merit clear aftermarket lenses for head and tail lights.

REPLY & QUOTE
Great nations do not fall because of external aggression; they first erode and decay inwardly, so that, like rotten fruit, they fall of themselves. The strength of a country is the sum total of the moral strength of the individuals in that country.
Ezr

This is one I'll have to get to add to my collection of 4x4s and while the Voyager set sounds nice based on Karls review the kit seems pretty good on it's own (except for the seat belts.)

Hopefully they'll also release the 2050 "Chinese Humvee" before too long

REPLY & QUOTE
Character is what you do when no one is looking.
Few things are harder to put up with than a good example.- Mark Twain
Make yourself an honest man, and then you may be sure that there is one less scoundrel in the world.--Thomas Carlyle

REPLY & QUOTE
Hisham (Hisham Haikal) said
Something like this would be a interesting conversion..I sure hope HobbyBoss has some plans for more variants.

REPLY & QUOTE
bill_c (Bill Cross) said
BTW, for you non Chinese-speaking folks, the vehicle's name is pronounced "Yawng Sherr," not "Sheee" as it looks. PRC Chinese uses a system of westernization called Pinyin that unfortunately was developed by Romanians and therefore has some strange orthographic combinations that are misleading in English.

Of course, many previous attempts to convert Chinese to Western orthography have been just as flawed, so....

REPLY & QUOTE
Karl187 (Karl N. Hoy) said
Bill, Hisham, Russ, Sean, Dave, Olivier- Thanks to you all for the kudos, much appreciated

Bill- The PLA were copying (sometimes with licenses) Russian military pieces for a long time but then they, in some ways, went down their own road and distanced themselves from overtly Russian designs although more often than not the basis for much of their current military hardware is Russian. They do have their own ideas and designs based on their own interpretations of Russian and Western tech. They currently have projects running for new helicopters, refuelling tankers, transport aircraft and a laundry list of other things from ships to guns- indigenous designs are being pushed like never before.
Personally, I'm just glad of releases like the Yongshi!

Hisham- the ET set looks quite nice- it would be very useful just for the seat-belts alone. Plus- the MG conversion picture you posted is cool- I also hope they plan variants for this.

Bill- thanks for the pronunciation lesson, always useful to know these things!

Also- I have some good references of this vehicle in various camo schemes, plus some interior views and one or two of the civilian version. As soon as I get some minutes to spare I'll put them up.

The Military Version in PLA Green:

Type 03 Plateau Digital (I'm not sure whether this is actually Type 03 Digital- it says 'Hybrid' on the side of the vehicle and I don't think the PLA use any Hybrid versions- plus the photo looks like it is in a showroom. It uses colors very similar to those in the regular Type 03 and is close to the color of the uniform version but as I said, I'm not sure about this.)

Unfortunately I can't find (yet

) any Yongshi in Ocean Camo- plenty of other vehicles so there are plenty of references- if anyone has any pics of the Yongshi in this camo then post them up!

I hope these are a help to anyone building the kit.

REPLY & QUOTE
Karl187 (Karl N. Hoy) said
I found some decent shots of the underside of the Yongshi showing nice suspension detail and the various colors etc. If anyone wants them just shout.

A build log for this is imminent, today or tomorrow and I'll put the link up here. Its falling together so far

REPLY & QUOTE
Hisham (Hisham Haikal) said
Thanks a lot for posting the pics, Karl... they will be very helpful when I start building mine.

I would love to have those pics of the underside if you could post them.. or send them to my e-mail address.

REPLY & QUOTE
Karl187 (Karl N. Hoy) said
Hisham- I'll post what I've gathered so far along with a few other reference pics. I'm still looking and if I get anything else worthwhile I'll stick it up here.

Centre Console Detail (Bill- could you translate the chinese in this picture, I'd like to kno what it says): 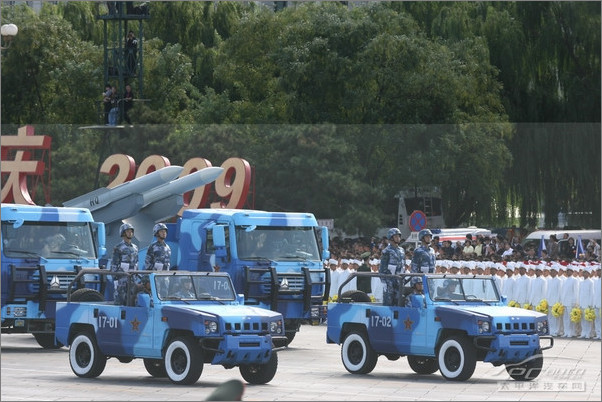 Thats all for now.

REPLY & QUOTE
Karl187 (Karl N. Hoy) said
My apologies for some of those photos not showing up. I don't know why they are not.

Here's two of the missing ones:

I also found a decent shot of the interior from the rear:

And lastly a shot of an Ocean Camo scheme from the left side- this is the side not covered in the kit painting instructions. The vehicles in the 2009 Parade that wore Ocean Camo were all painted in an almost identical pattern.